The solutions to exercises in this session will be published when the above groups have submitted them.

Almost 13% of young people worldwide are out of work, and their situation is unlikely to improve for four years, a report by the International Labour Organization (ILO) says.

[The report] warns of a “crisis” with more than six million people so disillusioned they have given up looking for work.

“The youth unemployment crisis can be beaten but only if job creation for young people becomes a key priority in policymaking and private sector investment picks up significantly,” said Jose Manuel Salazar-Xirinachs, executive director of the ILO's employment sector.

Since 2007, the number of young people without jobs has risen by four million —up from less than 12%, the Global Employment Trends for Youth report says.

In the European Union, one in five young people are looking for work, the report claims.

Some 27.9% of youths were unemployed in North Africa last year following the Arab Spring uprisings —a rise of five percentage points on 2010.

In the Middle East, the figure stood at 26.5% in the report's regional breakdown.

“Even in East Asia, perhaps the most economically dynamic region, the unemployment rate was 2.8 times higher for young people than for adults,” the report said.

But, the ILO report reveals, the true picture of youth unemployment is even more pessimistic.

Many young people are extending their time in higher education because they cannot find jobs.

Others are taking part-time unskilled work because they cannot find work in the fields they trained for.

The ILO says that more than six million young people worldwide have given up looking for work and are becoming increasingly detached from society.

By not using their skills they are losing them, the report says, and if there is no improvement in the jobs market soon, they may be not only unemployed, but unemployable.

NOTE
Hover over words in blue for additional information

1. Are the following sentences true or false?

a. The unemployment figure for young people in the UK is almost 13%.


b. The situation is definitely going to improve in 4 years.


c. The ILO thinks that the situation can be reversed.


d. The unemployment figure for young people was worse in 2009.


e. The situation is worse in East Asia than in North Africa


2. Answer the following questions about the text.

a. Why is "the true picture of youth unemployment even more pessimistic"?

b. What does the ILO recommend governments do to help young people find jobs?

Find the words in the text that correspond to the following definitions. 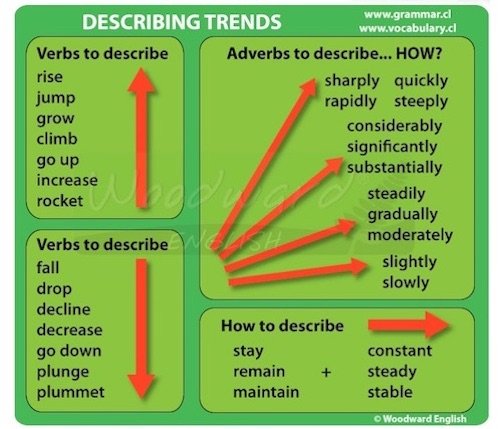 Memorize a few technical words from the toolbox and use them when you do your oral presentation.

You will get extra points!!

D. Choose the correct words in blue to complete the report.

2. There was a sharp / sharply rise to / by 38,000 in March due / led to the introduction of a new price discounting scheme.

4. Our competitors launched a rival product in the spring and this resulted in / from a dramatic / dramatically fall to 25,000 in May.

5. But we ran a summer advertising campaign and sales increased steady / steadily to / by 2,000 units a month throughout June, July and August until they stood in / at 33,000 in September.

6. The dramatic / dramatically rise to 45,000 in October resulted in / from the launch of our new autumn range.

7. But then we experienced problems meeting demand and sales fell sharp / sharply in November and remained steady / steadily at / by 39,000 in December.

Choose one situation and write an email in about 150 words 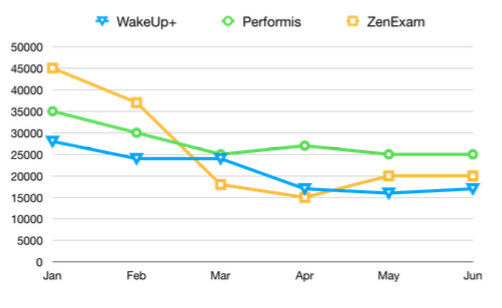 You are the new manager for the French branch of a global pharmaceutical company. You need to explain the poor results of your sales aimed at students to your American boss and develop strategies for the future.

You are part of the University Health Commission and you have just finished a survey about food consumption among students. Write an email to all students explaining your findings and giving your views and advice on the matter. 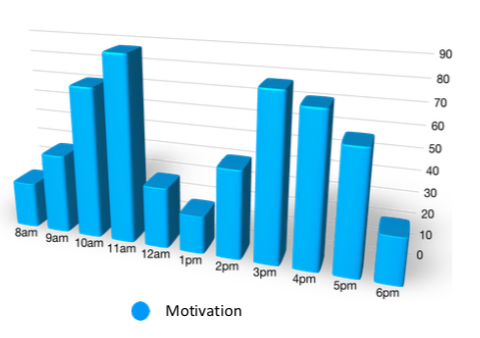 You are part of the Student Council and have carried out a study among your fellow students to determine their motivation in class throughout the day. Write an email to explain your views to the Dean of the University in order to reorganise teaching schedules. Suggest concrete solutions.

This is the first exercise you will do as a team, so you need to find 3-4 colleagues to decide what situation you will write about, and then send me your email.