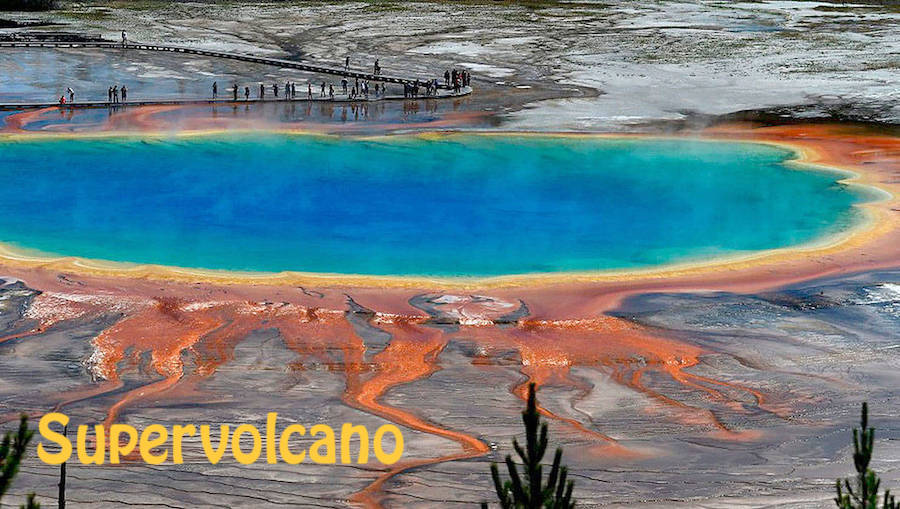 Yellowstone National Park is an American national park located in the western United States, largely in the northwest corner of Wyoming and extending into Montana and Idaho. It was established by the U.S. Congress and signed into law by President Ulysses S. Grant on March 1, 1872. Yellowstone was the first national park in the U.S. and is also widely held to be the first national park in the world. The park is known for its wildlife and its many geothermal features, especially Old Faithful geyser, one of its most popular. While it represents many types of biomes, the subalpine forest is the most abundant. It is part of the South Central Rockies forests ecoregion. Read more at Wikipedia.org

Okay, we will talk about supervolcanoes, but what about regular volcanoes? How much do you know about them?

A. The following activity will show you the diagram of a volcano and its parts. Can you place the labels in the right place faster than your colleagues?

Now, how much do you know about Yellowstone?

Watch the following video about the 5 things you must see when you visit Yellowstone. There are no exercises associated with this video. Just sit back and enjoy the show!


Due to COVID-19, the listening class test has been cancelled. Check new assessment procedure below. 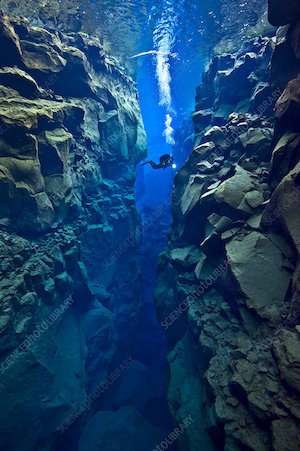 Some of the following terms will appear in the article. Practise them first, so understanding the text will be easier.

B. Match the following geology terms with their images. Remember. It's a competition, so the faster the better. 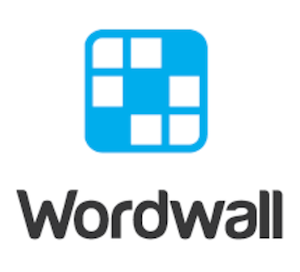 Now read the text. You will notice that the line numbers in the handout have been substituted by paragraph numbers here. Bear in mind that in the final test you will use line numbers instead.

Capable of spewing gases 50km into the air and plunging the world into long-term winter: what can be done to stop the Yellowstone supervolcano, asks Bill McGuire... 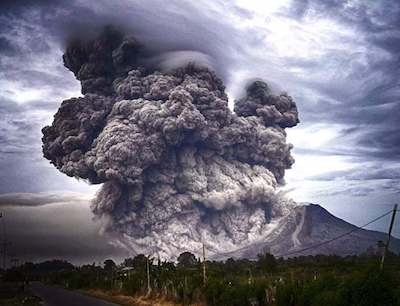 §1. One of the greatest natural catastrophes the world will ever see could be little more than a decade away. At least, that's the premise of a new BBC drama. Supervolcano traces the evolution of an enormous volcanic eruption —one that not only wipes out several states of America but that threatens the entire planet. But is such an eruption really on the cards? Well, supervolcanoes certainly [are] a normal part of the way the Earth works, and occur perhaps every 50,000 years. Two such blasts have happened in the last 75 millennia: one at Toba, on the Indonesian island of Sumatra, and another one at Taupo, New Zealand, just 47,000 years later (see photo below). 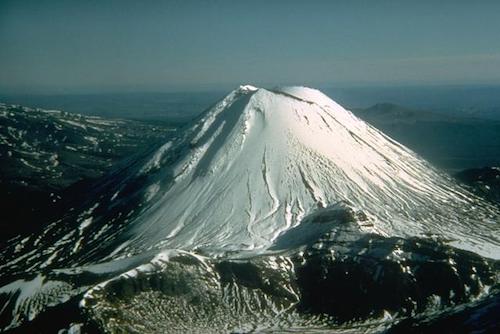 §2. Every statistic associated with super-eruption is larger than life. Molten magma is blasted out at a rate 140 times greater than the flow of water over Victoria Falls. Ash and gas are lifted more than 50 km upwards to the edge of space. Enough ash would pile up on the ground to bury the UK under a blanket 4m thick. Pyroclastic flows —devastating hurricane blasts of incandescent gas and blistering ash— would scour the land surface over an area of 10,000 square kilometres. Worst of all, a super-eruption is followed by a dramatic fall in global temperatures, leading to years of bitter cold known as volcanic winter. It's almost impossible to visualise the extraordinary scale of super-eruptions but they can be compared against well-known explosions. To do this, volcanologists use the volcanic explosivity index or VEI —a sort of volcanic Richter scale. Like its seismic equivalent, the VEI is logarithmic, which means that each point on the scale denotes an eruption ten times larger than the one below. The seemingly gargantuan eruption of Mount Saint Helens, in Washington State (US), registered a lowly five on the VEI. The colossal 1883 Krakatoa eruption, the most lethal volcano ever, is rated at six. Super-eruptions score eight. 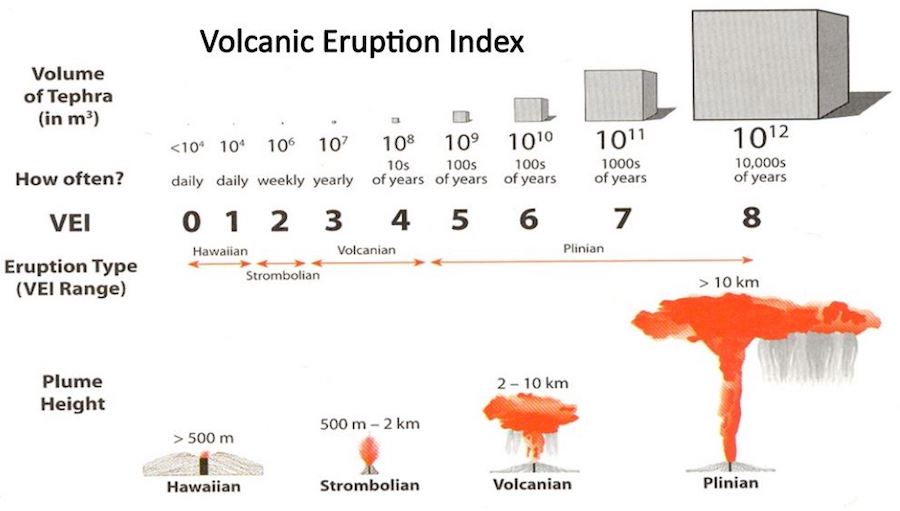 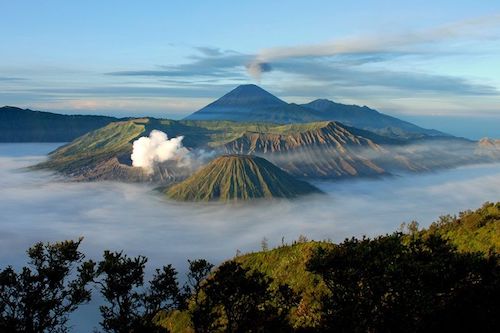 §3. The greatest super-eruption of all, at Toba (see photo on the right), happened above a so-called subduction zone, where the Indian ocean plate slides beneath Indonesia. Yellowstone supervolcano, home to three gigantic explosions in the past 2.1 million years, straddles a stationary mantle-plume across which the North American plate is slowly creeping at the same rate as a fingernail grows. While the last super-eruption at Yellowstone occurred 640,000 years ago, the volcano is far from dead. Geysers, hot springs, boiling mud pools, frequent swarms of earthquakes and the slow swelling and sinking of the surface all testify to a magma source that today may be as little as 5km beneath the surface. When will it happen?

§4. But what of the future? Do we have, as the forthcoming BBC film suggests, little more than a decade before Yellowstone explodes into life once again? Certainly the Yellowstone volcano continues to be restless, but no more so than 50 years ago when detailed observations began. The chances of another super-eruption wreaking havoc are probably around 1 in 700,000 in any single year, and many smaller eruptions have occurred since the last big one 640,000 years ago.

§5. The volcanic system is very closely monitored by staff at the Yellowstone Volcanic Observatory, established in 2001. They use GPS and satellite radar imagery to keep check on ground swelling, plus seismographs to monitor earthquakes that trace out the movement of hot water and magma beneath the caldera. There is absolutely nothing we can physically do to prevent the next super-eruption. Provided we have sufficient warning, however, we should have time to introduce measures such as food-stockpiling and rationing. 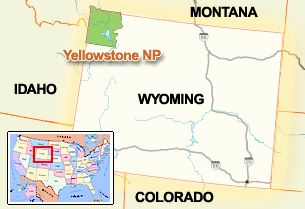 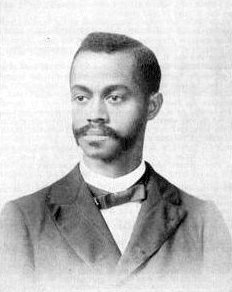 1. The last super-eruption at Yellowstone happened:

2. In 1883, Krakatoa erupted with an explosive force of how many units?

3. What causes the global winter that follows a super-eruption?

4. A super-eruption can be prevented by:

5. The biggest ever super-eruption took place in: 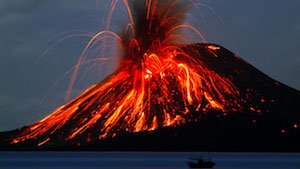 Watch the following 3-minute video created by the prestigious Smithsonian Channel and answer the True/False questions. Do not use subtitles this time, or else exercise D will be too easy.

D. Now decide whether the following sentences are true or false.

1. Scientists have discovered that the magma chamber was not beneath the caldera when the volcano exploded 640,000 years ago.

2. Montana is to the northwest of the supervolcano.

3. The plume of magma is currently made up of liquified rock.

5. Scientists say that, despite all our technical expertise, we are not ready for a situation like this.

7. Jake Lowerstern is looking for a common pattern with other super-eruptions around the world.

8. Geologist John Westgate has found ash from prior eruptions as far as Mexico.

9. When Mounth Helens exploded, its ash covered over 11 countries including Canada.

10. When Mounth Helens exploded, its ash covered over 11 countries including Canada.

11. All prior eruptions at Yellowstone have been much more powerful than the one at Mount Helens.

12. The Yellowstone caldera is not visible because vegetation has covered it all. 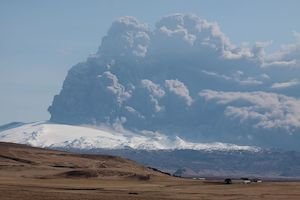 The 2010 eruptions of Eyjafjallajökull in Iceland were relatively small for volcanic eruptions, but they caused enormous disruption to air travel across western and northern Europe over an initial period of six days in April 2010. Additional localised disruption continued into May 2010. From 14–20 April, ash from the volcanic eruption covered large areas of Northern Europe. About 20 countries closed their airspace to commercial jet traffic and it affected approximately 10 million travellers.
Source Wikipedia.org